Forward chaining inference rules are required when reasoning is based on complex inter-linked conditions. We use RETE-based inference forward chain business rule to implement complex rule-based, decision making for production or expert systems using .Net framework. Forward chaining starts with the available data and uses inference rules to extract more data (from an end user, for example) until a goal is reached.

Your application needs a forward chain inference engine if:

Whenever new facts are asserted into a system, many rules may need to be re-evaluated to determine which are satisfied by these facts. A brute-force implementation could simply re-evaluate all existing rules against the newly introduced facts. This approach would achieve a result but would exhibit a very poor performance, as the number of rules and facts being considered have increased. Dr. Charles L. Forgy developed an algorithm that constructs a sophisticated network of nodes to represent the conditions associated with each rule and the dependencies between those conditions.

For reasoning, application does not need to iterate through all the data and run every rule to check if they are met when values are changing.

Build and manage alpha and beta memories and change the facts on-the-fly.

The assertion of facts will cause an evaluation of the network of conditions that are dependent on the asserted facts. If the conditions are satisfied, the facts will be sent down the stream until they reach the agenda. 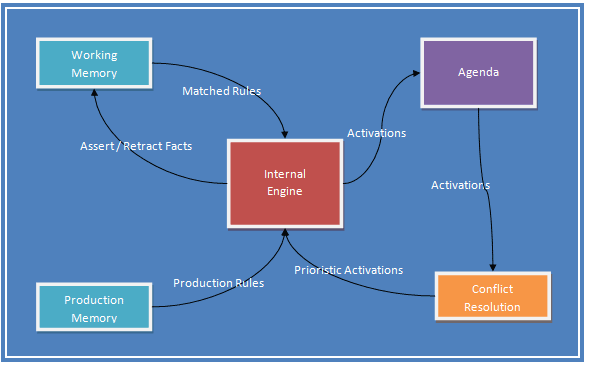 Afterwards, the activation of that node will be executed. When multiple facts reach the agenda, the conflict resolution strategy will help to prioritize the activation mechanism. 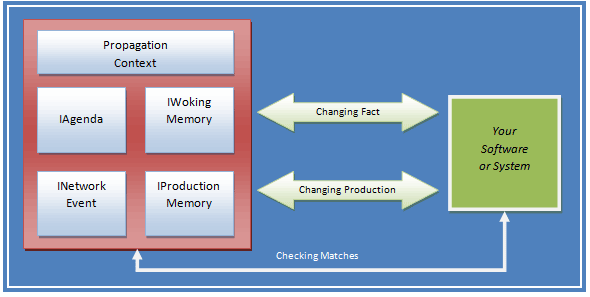 All of this means that your application itself will be managing the facts, conditions, productions, agenda, and activation and will work with these things directly.