What is forward-chaining inference and where is it used?

Inference is the act or process of deriving logical conclusions from premises known or assumed to be true. Validating the assumption are based on some inference rules.
— Wikipedia

Artificial intelligence has played a big part in the evolution of methods for inferring, which is used in expert systems, business systems and production systems. In a complex business system, when there is some data available and the system needs to conclude an agenda from that data, the forward-chain inference engine is really useful. This is especially true when the engine uses a RETE algorithm that allows the rules be defined as a pattern, and it finds a match from the existing data in order to conclude something. For example, in a sales system it could be used to determine whether a person is a preferred customer by running the sales information against some inference rules.

“…Rete match algorithm is a method for comparing a set of patterns to a set of objects in order to determine all the possible matches…” Rete (usually pronounced either “REET” or “REE-tee” from the Latin word for “network”) is an efficient pattern matching algorithm that deals with a Production Memory (PM) and a Working Memory (WM) in which each of them may change over time.
Working Memory is a set of items that represent facts about the system's current situation or state. Each item in the WM is called a Working Memory Element (WME) that can be modeled as

Let's consider a Block problem. Some blocks are on top of or under each other on a table as shown below: 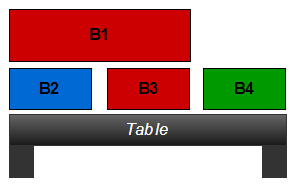 Blocks in 3 colors on the table

With the introduced notation, the above picture can be modeled as follows:

In this simple problem, let's say we are going to answer questions regarding the positioning of the blocks. In a procedural approach, in order to answer any questions regarding this positioning we need to iterate through the blocks and the evaluate the conditions. It becomes more complex when we want to figure out relative positioning information for each block (e.g., left of, on, under, etc.). It becomes an endless loop when the blocks positions change constantly, such as when one of them moves on top of the others.

In this definition, ?x, ?y and ?z are some variables where for example (?x ^on ?y) is a condition saying “find two blocks where block ?x is on block ?y”.

No loop, no iteration, no condition evaluation, and no reference check for the neighboring blocks needs to be written in your application code.

In our RETE-based forward chain inference rule engine, modeling productions and working memory elements can be achieved in three ways:

When API is used, a C# version of the sample production rule would be something like this:

RETE contains two parts: alpha network and beta network. Each of them have their own types of nodes (e.g., Alpha memory, beta memory, join node, negative node, etc.). When the engine creates the graph from the productions provided, it then pushes the elements to the graph.
The graph for this simple production rule and a couple of WMEs looks like this: 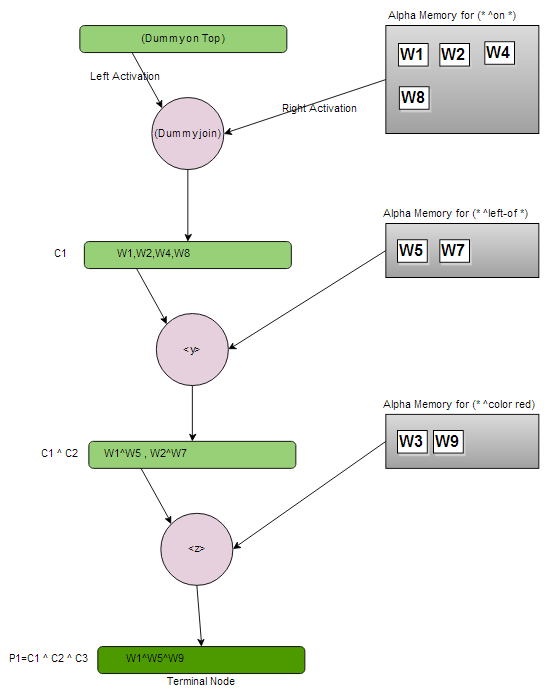 In our Resource Hub site, we will post some articles about our forward chaining inference engine in future. We will show how you can model productions and working memory elements in .NET and how you can integrate them into your application with more practical examples. Stay tuned…