Let’s say in your application you have a logic that, based on the Scope of a Record, associates a Status to the Record. This would look like something similar to the following code: 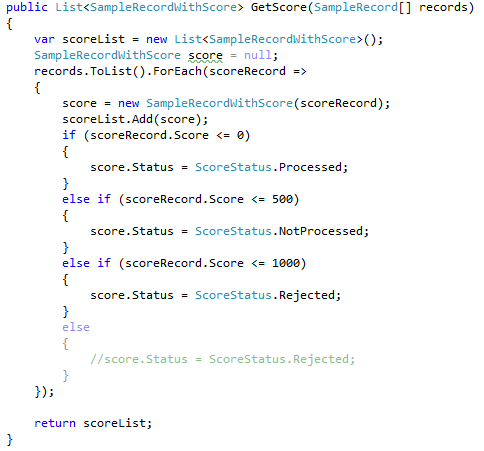 As you see in this approach, using procedural logic you implement your code line-by-line in the rule engine.

And the coded implementation of your actual logic will appear as follows:

The procedural approach is fine when the people maintaining and deploying the logic have programming skills, or the logic itself is procedural in its nature.

However, there is other approach to solving this problem. This occurs when you model the logic using a decision modeling approach. One of the many ways of implementing this type of model is to use a Decision Table. With this approach, you can model the logic using any spreadsheet (as the Domain Specific Language). In this example we used MS Excel to model the decision. However, you can also use XML language, similar to the procedural approach. 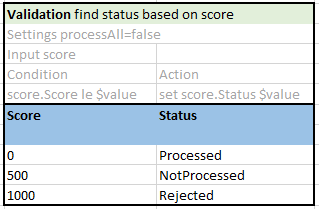 As you can see, your rule implementation is not using any procedural approach. Therefore the benefit is that it is more understandable and maintainable even to those with no programming skills.

The only difference is the piece that calculates and assigns the Status.

There are many ways of modeling business rules and logic. To learn more, please visit https://www.flexrule.com/archives/modeling-business-decision/

The first and most obvious benefit of externalizing your application logic using a rule engine is that you can update this logic simply, with no headaches and by avoiding the ceremony of deployment processes. Updating your application logic becomes more like updating the contents of a site (i.e., config file, resources, etc.) – which is always easier and safer than updating assemblies, isn’t it? Therefore, your deployment process is significantly simplified.